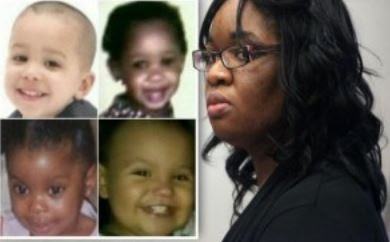 A daycare worker left four kids alone at home while she went shopping, During the time she was outside, a fire broke out and sadly killed four kids and seriously injured three others.

24-year-old Jessica Tata from Texas, is facing life in prison for the death of the four young kids who were left in her care.

Prosecutors allege that she went shopping at Walmart while leaving her daycare children home alone, when a fire broke out killing four young children. Tata was seen on the security cameras shopping at Walmart. It is believed that the fire started after Tata left a frying pan with oil on a stove while she went out to run errands.

Two days after the incident, Tata fled to Nigeria. She was later arrested and extradited to the United States after a joint effort of the U.S. Marshals and Interpol.

The fire killed Shomari Dickerson, Kendyll Stradford, Elias Castillo and Elizabeth Kajoh, all less than three years old. Three other children in her care were left in critical condition and they were taken to the Shriner’s burn hospital.

Tracy Storms, who lost her grandson Shomari in the fire, told reporters: "Sorry, there is no forgiveness for anyone who makes an income watching children and has an audacity to leave them alone even for a second. I don’t understand how this woman can look herself in the mirror knowing that she destroyed seven children."