D'banj alongside many celebrities like Wizkid,Sound sultan,Iyanya, The Okoye's and more have been in support of the #saveojb campaign. 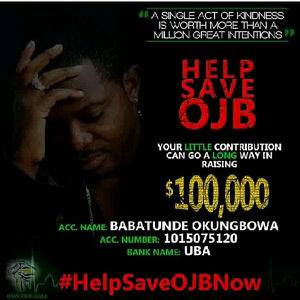 Our own very best entertainer and one of the biggest name in the music scene D'banj have shown his own part of sympathy as he donates a whooping sum of 7million Naira for the Kidney transplant of the legendary producer [OJB].

This guys have showed much love to him already but for us who don't have, lets keep our candles burning and pray for a successful surgery for him..
Posted by Justin Kingland (DRM) at 10:05