Our Analysis of Chibok and an Nostradamus Postulation. 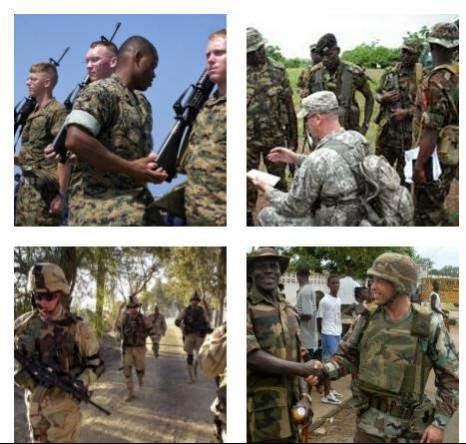 The opposition played a dangerous and risky game and Goodluck Jonathan﻿ like that TV program by Amaka Igwe of the 80's has said "checkmate".

It is Ome Omenai who asked

"If the Chibok girls are not missing, why is this administration allowing the world to get involved?"

This administration KNOWS these girls are not "missing". If you listen to the first Lady in that "only you that waka come" video, you will see that she was very suspicious that grieving parents may not exist hence "only the principal waka come"

The administration, for it not to be said to be "denying" the kidnapping, or "wishing it away" or covering up, through the police and in the nationwide broadcast BEGGED PARENTS WHOSE CHILDREN ARE MISSING TO COME TO THE POLICE STATION.

That has to be a first in history where you that lost your 16 years daughter has to be begged to come to police station when in reality the police station should be a beehive of activities for grieving parents.

Even the Borno government house and Local government headquarters of Chibok, there is graveyard like silence. It definitely does not look like 276 girls are missing.

The human instinct where grieving people naturally move towards each other, if only to hear news of their daughters is absent. PARENTS ARE IN THEIR HOUSES WAITING FOR NEWS???? Who is calling them with it or do they have CNN?

I know how Police Station in Sapele would be if "gbomogbomo" stole 5 children. Parents and well-wishers will sleep in government house or police station just to hear if there is news on their girls.

So why is Borno State govt and the opposition selling this dummy?

Goodluck Ebele Jonathan﻿ HAS NEVER BEEN AS MALIGNED ON SOCIAL MEDIA AND ESPECIALLY WORLD MEDIA LIKE THIS.

Even papers that used to support him here, since Obiageli Ezekwesili's march with false parents and hired actresses, the attack has been relentless as they say "he is doing nothing about the girls"

But the foreign media likes bad stories of Africa and in fact bad stories worldwide. Notice if anyone is interviewed and he does not attack this administration, the interviewer quickly says "thank you for your time" and ends it.

So the APC and Borno governments looking to totally discredit the SOE (state of emergency) has sold you all a dummy and you all opened your pockets and paid.

Then GEJ, that man Ogbemudia told you "is more brilliant than many of us put together" has absorbed the attack and very denting blow for a loss of goodwill to gaining of actual position of strength.

While his "Queen" Patience GEJ was engaging opposition "bishops" and "knights" and getting laughed at for her linguistic semblance to Mrs. Malaprop, GEJ "castled".

The US that has been looking for a way to put foot and soldiers down on sub-saharan Africa has finally done it. Now they will have an eternal post in Sub-saharan Africa and even if later they say they are gone, all what is needed for them to arrive in 12 hours and encamp in case of global conflict will have been put in place.

Should world war start, Russia cannot win the race to Sub-saharan oil of Nigeria and now Ghana. They also cannot use the soils for food growing as Hitler had planned for Africa.

Nigerians in some inexplicable pausing of the use of their reasoning faculties, failed to really listen to SHEKAU in that video where he never mentioned Chibok or WAEC. He does not boast of the hours he took to arrange the transportation and the amount of girls he took.

In the video he said "we will soon begin to take ..." meaning the video is not about Chibok or the massive female heist which has already taken place. He speaks of a future event.

And all the villagers say they did not see trucks...many enough to lift 234 girls from a very quiet unindustrial town...so many truck nor hearfd any gunshots.

Nigerians do not bother to wonder if it is this very incidence he is talking about or the speech could have been any other attack.

He Shekau chooses the less lucrative alternative of selling little girls to the poor, in and around Chad and Cameroun to a huge ransom and release of held brothers in prisons.....something GEJ would have agreed to easily for the safety of 176 girls.

And that representative or who that is quick to tell us, "the girls are now in Chad and Cameroon. They have been sold for 2,000 naira. They have been married off" even before Boko Haram made contact. EVEN BEFORE SHEKAU MADE CONTACT via youtube video.

Did they in anyway see this SHEKAU video and play their game to the script he had already written? Like chess moves read from a Bobby Fisher text, did they totally adapt their play to pre-arranged moves?

Well... We have looked at this thing a million and one ways and in our Analysis, AS AT TODAY, We are 70 percent certain there was no kidnapping.

We sit back and congratulate the president. What a wonderful capitalization on a gambit.

Now he has the US army at his disposal in his country. ANY COUP STANDS FOILED.....yes, coups are by no more than 100 soldiers......easy for the US army to take back any radio station they capture for their broadcast and easy to zoom in and bomb and snipe and quell any attack on the villa.WEI SAID GEJ "CASTLED"

Then also, should the Niger Deltans decide to break the country at the constitutional conference, should things escalate. Should a civil war ensue, AMERICA IS ALREADY HERE.

Russia almost beat them to the Nigerian oil during the Biafran war. But not anymore AMERICA IS HERE.

America called the Northern governors and flew them over.

How the US meets provincial leaders of a country shows the deep division in Nigeria
. Mumu governors went, insulted their country and president and America joined them and said "yes. Abuja refused to support Northern governors push for education and employment" when Abuja has built more almajiri schools than the state governments. When Abuja has built so many universities on their soil than in the south. When Abuja chose their soils to begin the rice revolution that made the Agric minister Akinwumi "Forbes Man of The Year." proving the success of the farming initiatives: when the groundnut is being grown again....something their own Northern leaders and governors could not do.... farming that is also a State Government function....even local government....

YEt America spoke HIGHLY in their favour and they are happy. Yes, Obama and John Kerry has heard their argument how GEJ cheated them of their one term agreement and RIGHT TO RULE.....

Now America can monitor even the anti-Israel terrorist group's activities in Nigeria. HAMAS and AL QAEDA have lost their vacation spot.

But they should not have brought attention to Nigeria where a lot of their financing was going on under the radar. They were planting even CENTRAL BANK GOVERNORS and STATE GOVERNORS who all regularly visit Sudan, the African mother-bed of terrorism.

But someone got greedy. Someone got stupid. They decided to smoke weed where they keep guns and drugs and the police have followed the smell and now are here....over stupid weed/marijuana smoking. Nigeria ultimately is lost. A stronghold, a bastion is lost. AMERICA IS HERE....

YES AMERICA IS HERE, RUSSIA IS NOT

So everyone, sit back and watch as Nigeria finally is no longer the Beautiful Bride of International politics. No more are we "unaligned". Like SHEKAU's "kidnapped" girls, we have been married off to a side...AMERICA.

But our heart are with the "pawns" which are the girls....every girl in Northern Nigeria, hoping...praying they can get to the 8 rank and become the "queens" they should be.Hoping no one "sacrifices" them.

For those who think Shettima is incapable of atrocities which may include kidnapping and bombing, his former governor and former benefactor and co APC member says bombings in Borno is not by Boko Haram but by him...SHETTIMA.

TO BE CONTINUED.. WAIT FOR THE PART TWO OF THE DUMMIES SOLD
Posted by Justin Kingland (DRM) at 10:30