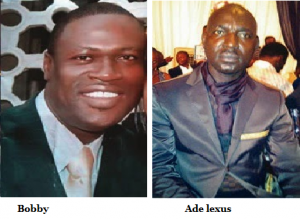 It beats me how someone will kill his fellow human being and still sleep comfortable at night. Oh dear! If not for the men of the Special Anti-Robbery Squad in Lagos, socialite and businessman, Victor Adelakun popularly known as Ade Lexus would have been killed allegedly by his own friend.
Four men allegedly hired by his friend, Adebayo Orekoya known as Bobby Ibadan, an Ibadan based hotelier were apprehended by the police at a night club in Ikeja when they came to Lagos to carry out the dirty job. A SARS informant overheard their discussion at the club and quickly alerted police who swung into action and apprehended three out of the four men.
A picture of their victim, Ade Lexus and guns were found in their possession…
Upon interrogation, they confessed Bobby sent them. The police used one of the men’s phone to reach Bobby, and as soon as he picked the call, he told them he wanted the job done that day without any delay. “Go to the club he hangs out, if you don’t see him there, go to his house and execute him.” he said.
Unfortunately, Bobby escaped before police got to Ibadan to arrest him.
Speaking about the incident, Ade Lexus said he was shocked that Bobby tried to assassinate him, because they were not close and the only time he turned him down was when he asked for a loan.

In his words: “Bobby is not my business associate. He is not my friend either. A friend of mine in the United Kingdom was the one that introduced him to me. I have met with Bobby only on a few occasions.

“If he had succeeded with the assassination, no one would have suspected him because he does not stay in Lagos and we do not chat often. He told me to lend him money a while ago for a business project, but I turned him down. Maybe that is what made him angry.

“Also, the arrested suspects said Bobby alleged that I snatched his wife. That is not true; I am a happily married man with beautiful children.” SOURCE