Pastor used a cutlass to inflict a deep cut on his wife for not going to church.. 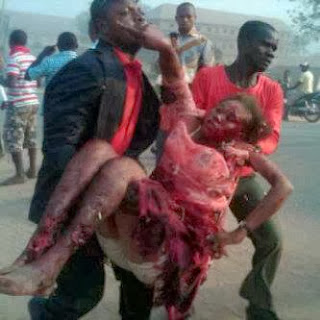 ABEOKUTA – Men of Ogun State Police command have arrested a-45-year-old  man,  pastor  Daniel  Samuel for stabbing his wife over the later refusal to attend church activities.
Daniel , an  Apostolic Church pastor  was reported to have  used a cutlass to inflict a deep cut on his wife, Patient  Samuel in her neck  in Owode-Egba in Ibafemi Owode local government area of Ogun State.
Vanguard gathered that, the offence of the 42 -year -old wife of the Pastor was because she gave preference to  her work over the  church programmes.
It was further gathered that, shortly after the man attacked his wife with cutlass, he alerted the neighbours that his wife has been matcheted by some unknown men , urging the people to help him take his wife to  hospital.
More details soon... Vanguardngr
Posted by Justin Kingland (DRM) at 00:50