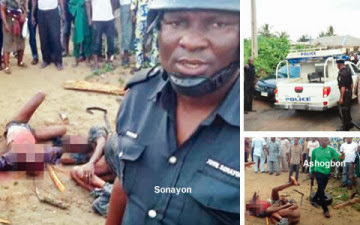 According to new reports, the police officers indicted in the lynching of two innocent young men (Ifechukwudi Nwanikpor, 25, and Kazeem Onayemi, 26) in Ajara, Badagry, have been granted bail.

The officers were arrested due to their alleged involvement in the mob action that led to the brutal killing of the two young men as captured by various video clips which later went viral on the internet.

According to our source, Inspector Adefemi Ashogbon, Sergeant John Sanayon and seven other police officers were granted bail due to their deteriorating health in detention and were allowed to seek medical attention pending the outcome of the investigation and date of their trial.

A video recording by some bystanders exposed Inspector Adefemi Ashogbon and Sergeant John Sanayon, who were attached to the Badagry Police station, at the scene of lynching while seven others police officers were detained for allegedly planting guns on the victims and labelling them armed robbers.

Several calls were made to the Lagos state police spokesperson, Ngozi Braide, in a bid to ascertain the grant of bail. However, they went unanswered.