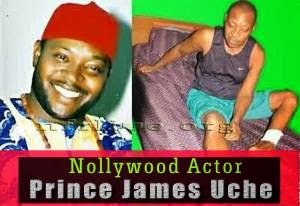 Prince James Uche, Another Nollywood Actor with Heart Disease and Kidney Failure: Served with eviction notice; wife on the run!
Should the unexpected happen and God forbid, Prince James Uche kicks the bucket, all his friends, colleagues and relatives who deserted him now will start singing his praises. Now, the young man is in distress and  seeks help, nobody has come to his aid.
Prince Jame Uche is obviously and sadly on his own as his land lord served him a quit notice to vacate his apartment. We all are still mourning the death of Muna Obiekwe whose sudden demise took the movie industry like a thunder-storm. I have called Ibinabo Fibrisima, the National President of the same Guild , James served as the Vice, to know what AGN is planing to do for James, IB, who is on Goodluck Jonathan’s campaign train is yet to return my calls.
Daily Times of Nigeria has the full story, Please read-
“Nollywood actor, Prince James Uche, who was once a vice president of AGN, has been issued with a quick notice to leave his Gbagada home despite the fact that he is currently battling with an undisclosed heart disease and kidney failure. His wife is said to have abandoned him few years ago with their 3 children.
James now spends most of his time in his church, Our Lady the Queen of Peace Catholic Church near his home. He revealed his sickness started since 2007;

“Something struck me on the left side of my face about eight years ago, when I was heading for the burial ceremony of Pete Edochie’s mother at Nteje in Anambra State. “I got to the venue of the ceremony and stayed in the town for two days. On the third day, I suddenly found that I could no longer move my body freely. Although I barely managed to get up on my feet, I could not climb up the staircase.
“I had to wait till the following Sunday before deciding to leave for Lagos. But my friend, Edoche, persuaded me to follow him to Enugu where he lived at the time. I slept in Enugu on that day. In the morning I went for treatment in a hospital.
“After the doctor had finished examining me, he stared at me with his mouth half open in shock for a long time. “When I asked what was wrong, he said I should have been dead. He took my pulse again and then, sweating, said my blood pressure was abnormally high. He said it had risen up to 300 and it was a miracle that I was still alive.”
According to reports, Uche’s health has continually deteriorated over the past years. Aside battling from the heart disease, he is also slowly losing his memory and sight. As if to worsen it, he is also suffering from kidney problem. His kidney is said to not function properly and there is fear it it might be completely destroyed. He was lucky to be helped by church members who paid for his diagnosis five times in 2013. But now it is in dare need of medical attention.
Uche is really looking emaciated and financial support is mainly coming from the church. This is very sad. Fans are already pleading with the AGN president, top notch movie stars, and good Nigerians to help him so that we don’t lose another star like we recently did”-Time of Nigeria.
Nollywood actors should please come to the aid of one of their own.  Musicians pulled resources together recently to help with their own who had a kidney problem. Nollywood actors should be able to do more. Are we going to wait again until another Muna Obikwe tragedy happens?
Time to save Prince Uche James is now!