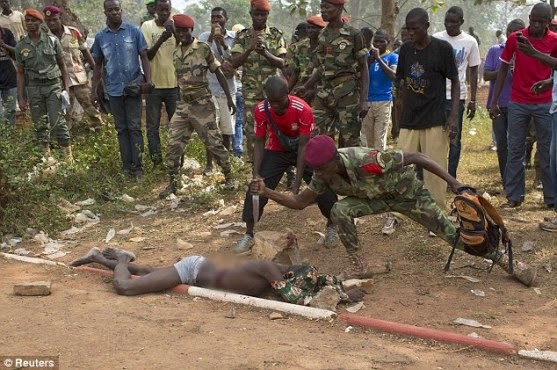 A group of soldiers in the Central African Republic lynched a man they suspected was a rebel minutes after hearing the new president’s promise to restore security at a ceremony to reinstate the divided country’s armed forces.
About 20 uniformed soldiers accused a member of the crowd of having belonged to Seleka – the mostly Muslim rebel group that seized power in a coup last March, before stabbing him repeatedly until he was dead.
A soldier stamped on the lifeless body, which was then dragged nearly naked through the streets as residents looked on and took photographs. Continue… Ten minutes earlier the new interim president, Catherine Samba-Panza, stood just 20m away where she addressed a crowd of at least 1,000 soldiers.
The Army effectively disappeared during nine months of Seleka rule.She told the gathering at a training ground in the capital Bangui: ‘Within a month, I would like to fully secure the greater part of the country and I aim to stick to my word.’

Seleka disbanded after Samba-Panza’s inauguration last month and is deeply resented by the Christian majority after months of lootings and killings. 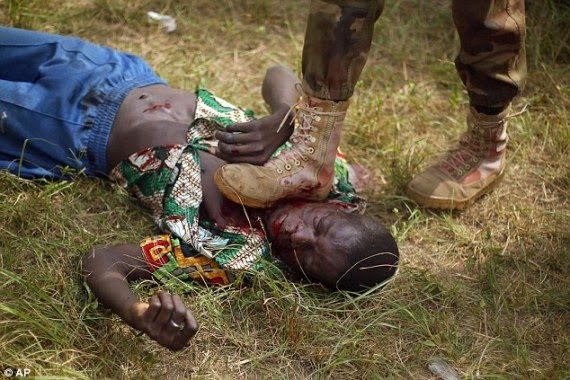 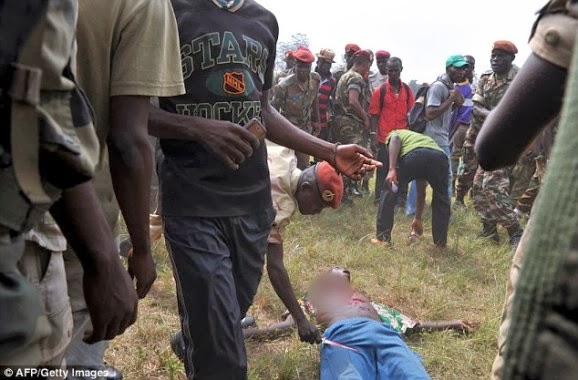 Peter Bouckaert, emergencies director at Human Rights Watch in Bangui, tweeted that the corpse of the lynched man had been burned.
He posted a photograph showing a man holding up a severed limb next to a bonfire, as an armed French soldier gestured in the background.
Source: UK Daily Mail
Posted by Justin Kingland (DRM) at 04:44